What more could he have done?

Tasmanian Ordinary Seaman Edward 'Teddy' Sheean was 18 years old when he and his crew of the HMAS Armidale came under fire from Japanese aircraft in 1942. The ship was badly damaged and sinking fast. Survivors of the attack were helplessly floating in the water. Japanese fighters were strafing them as they bobbed around unarmed and defenceless. The only weapon with which to repel the enemy was mounted to the ship itself. 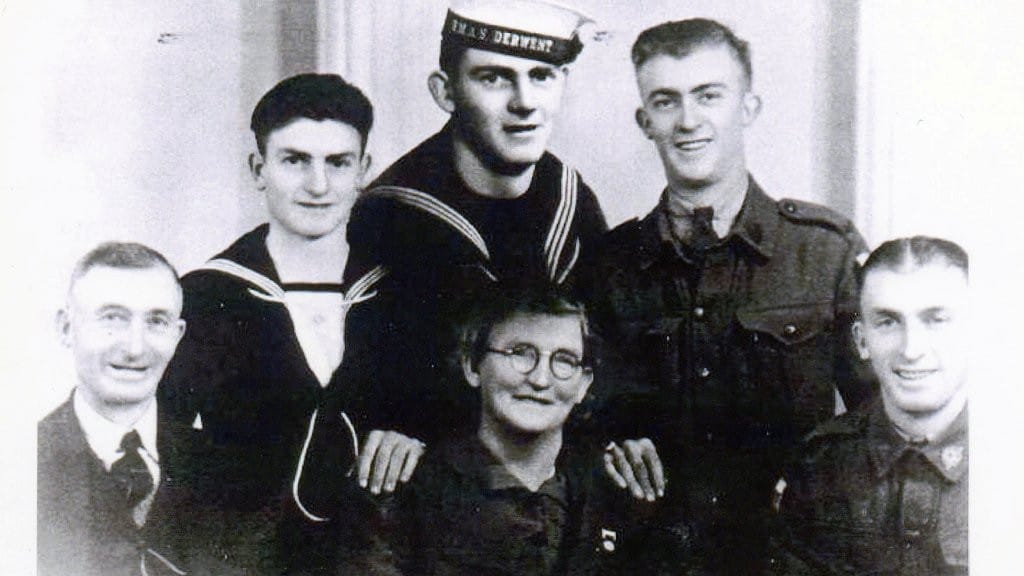 Teddy Sheean (2nd L) with his dad James and mum Mary and three of his six brothers who also enlisted and fought during World War Two (WWII).

Teddy was lowering life rafts and saw the strafing and ignored the order to abandon ship. He ran back to the Orleakon anti-aircraft gun, strapped himself to its ballast, and opened fire. He tied himself to that gun knowing that it would drag him to his death. But in doing so, he brought down two Japanese aircraft and helped saved the lives of 49 crew. One of them's still alive today.

Teddy died that day, but his acts saved lives. They showed incredible courage. His bravery and his example is the model to which the men and women of the modern Navy aspire.

This is all found by the independent Defence Honours and Awards Appeals Tribunal in 2019, which recommended that Teddy Sheean be awarded the Victoria Cross of Australia. That's the highest military honour for an Australian. To receive it, you need to meet one of three extraordinarily high bars. The Tribunal found that Teddy didn't just meet one - he exceeded all three.

The Prime Minister has decided to give him nothing in return. He's just hoping that we're going to shut up and move on.

We should be celebrating Teddy. He is a hero. He deserves better than the arrogant dismissal of his sacrifice by his own government. He earned this. Give Teddy his VC.