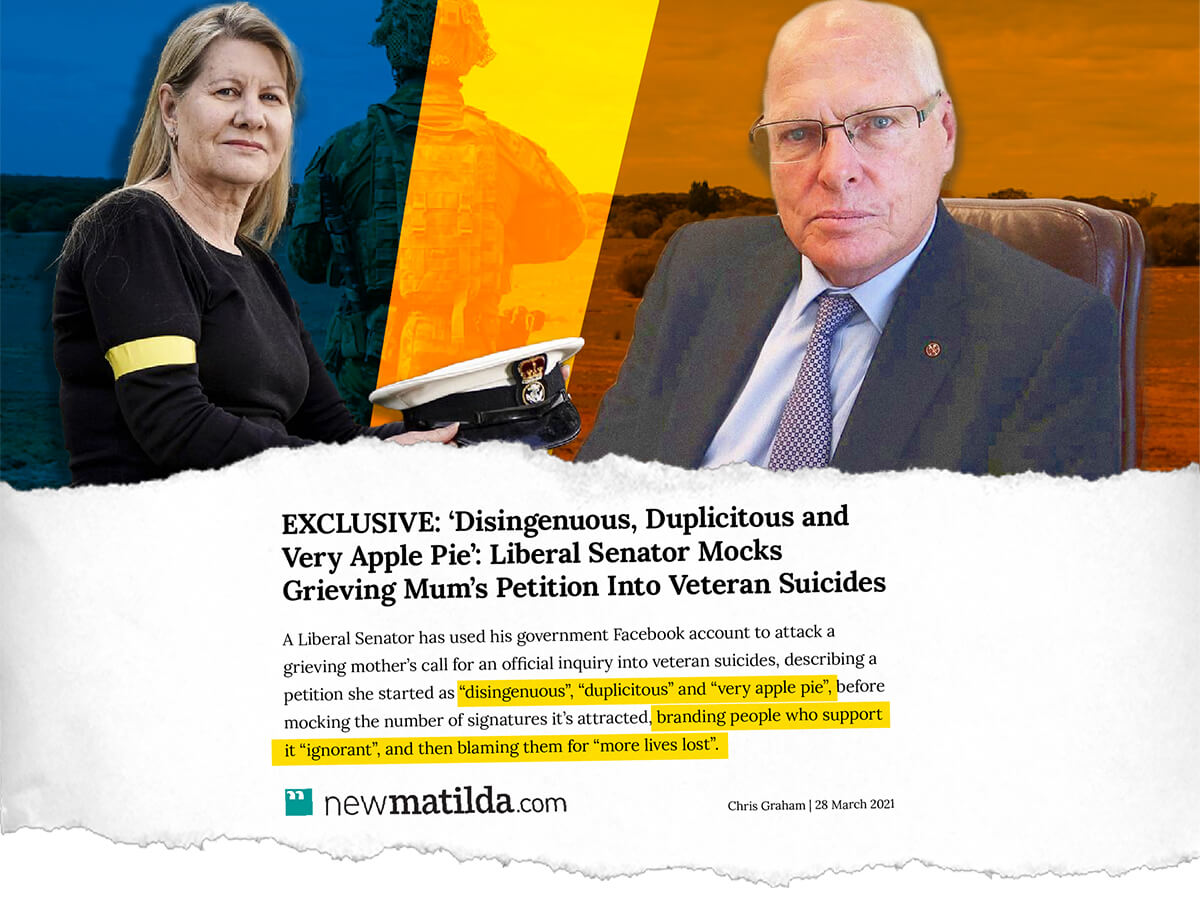 She's being attacked by Government Senators and can’t afford to keep fighting on her own. She’s nearly broke. I want to help her.

I want to be completely clear with you. Every cent donated goes to Julie-Ann Finney. Nothing is going to me.

Julie-Ann Finney has been campaigning tirelessly for a Royal Commission into veteran suicide. For her, it’s personal.

In 2019, Julie-Ann Finney’s son Dave took his own life. Dave, a 20-year veteran of the Royal Australian Navy, reached out to the Department of Veterans’ Affairs for help.

He was told he had to wait six months.

Julie-Ann is spending every bit of time, energy and money she has to fight to make sure no parent of a veteran has to go through what she’s had to go through.

And right as the campaign is taking flight, she’s having to cop these kinds of attacks from people in positions of power.

She’s spent every cent she has to her name fighting for veterans. Meanwhile, government senators are drawing a salary attacking her and those supporting her.

She can’t afford to keep fighting on her own. She’s nearly broke. I want to help her.

Every cent donated goes to Julie-Ann Finney. Nothing is going to me.

You’ll get the chance on the next page to pass on a message to Julie-Ann, to give her some support as well as some help with the bills.

Please, help Julie-Ann out. Let her know she isn’t fighting this alone. Because when one of us gets singled out like this, it’s an attack on all of us. It’s not fair, it’s not right, it’s not on.

And I don’t want her losing right when she’s so close to winning, just because she can’t afford to keep it up.

Can you chip in?

We strongly recommend you use this form.

To use PayPal keep scrolling down.

Would you rather donate using PayPal?

To contribute by bank transfer, please enter the following details:

Please use your full name as the reference.

To contribute by mail, please send a personal cheque made payable to the "Jacqui Lambie Network" to:

Please include your full name, address and email address in the envelope.